The outdoor sofas are back in use. Pip seems to approve.

The toughest lockdown rules in Europe are slowly being eased, and Mallorca (along with her sister islands) is in Phase 2 of the de-escalation. All being well, we’ll move into Phase 3 next Monday, 8th June.

Prime Minister Pedro Sánchez will ask Spain’s Congress of Deputies tomorrow to vote for approval for one final two-week extension to the state of alarm, which came into effect in mid-March. After June 21st, we’ll be in that unknown but much-mentioned state of ‘new normal’.

What will Phase 3 mean for us? Never mind that. I have a far more vexing question that needs answering: Why, when we greet them during our wanderings in the lanes around our finca, do cyclists and walkers always respond in a different way from us?

If we say buenos días, they reply bon dia. If we try bon dia, we get a buenos días in response – or sometimes what sounds like a conjoined version of two greetings: holabondia. Sometimes, whatever we say, we get an adiós or an adéu – an economical way of saying both hello and goodbye: one word that’s as brief as our encounter. This is what happens when you live on an island where both castellano and the local Catalan dialect mallorquín are spoken.

Then there’s the other greeting that’s common amongst Mallorcans. It sounds like ‘wep’ – although it’s written as uep. I suppose it’s the closest equivalent to ‘hi’ and is often accompanied by a lift of the arm or an upward tip of the chin. This does feel like something very local and, to me, a somewhat masculine greeting – because I don’t remember ever hearing a woman use this. 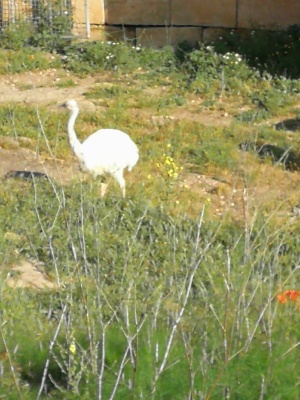 Uep is a greeting I’ve used only to attract the attention of one relatively new neighbour. Taking one of our recent morning walks along a route we hadn’t trodden for months, we spotted the incomer: a young ostrich, strutting its stuff in a field of gobbling turkeys.

We stopped to look at it for a while and, hoping it would come closer so we could get a better look, I called out hola – a ‘hello’ used in both castellano and mallorquín. Our ostrich neighbour ignored us, so I tried uep and that did get a reaction: the ostrich ignored us, but the local greeting set the turkeys all a-flutter around the yard.

Maybe we should stick to our roots and offer the folks (and beasts) we meet a cheery English ‘good morning!’ or, given the part-Irish ancestry of The Boss, even a ‘top of the morning’. Now that would confuse the locals.