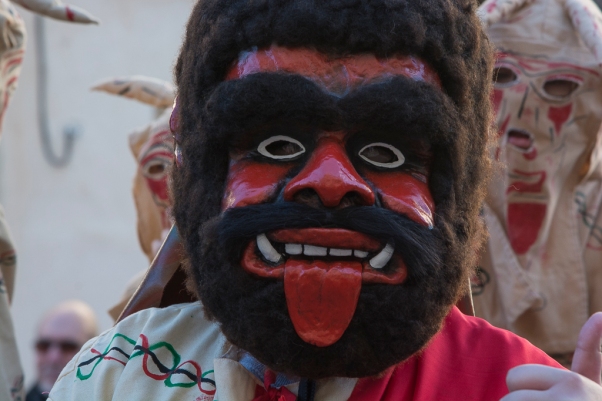 A scary dimoni in the streets of Manacor

Hello! And a belated Happy New Year. Mine unfortunately started with bronchitis, which laid me low at a time when normally I’m itching to get started on the new year. Colds, flu, and other assorted viruses are rife on Mallorca at the moment and it’s hard to avoid them. Unusually, I haven’t felt up to writing much – although I did manage to write a short story for an international fiction competition. If I win, I’ll invite you all round for a glass of cava!

Fortunately I was just about well enough for our usual visit to Manacor last week for the Sant Antoni fiestas. The good folks of Manacor love this fiesta, kitting themselves out in the latest Sant Antoni sweatshirt, t-shirt, or other assorted merchandise printed with the current year’s Sant Antoni logo. 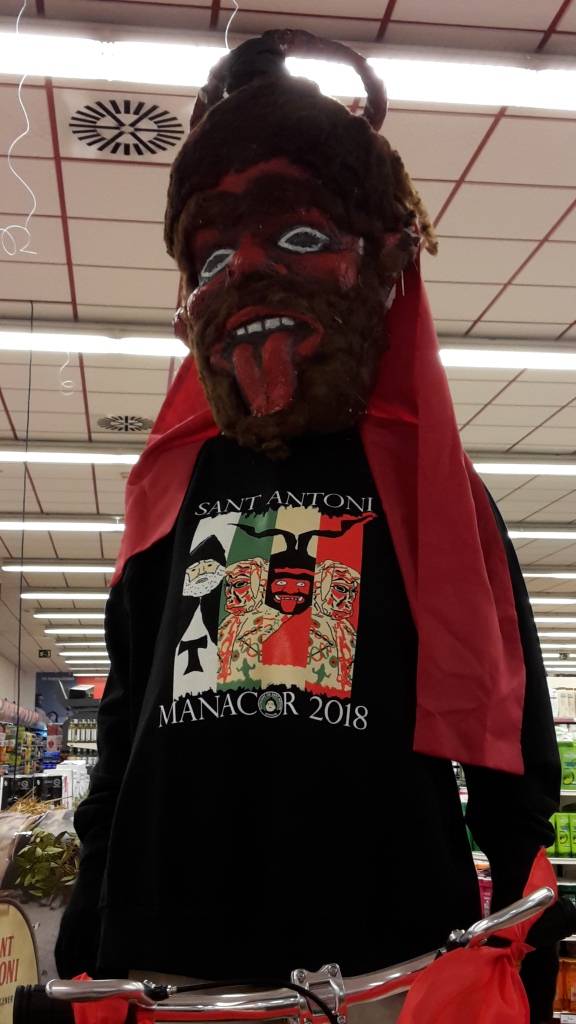 The 2018 Sant Antoni must-have, as modelled in Hiper supermarket

A day or so before Sant Antoni, heaps of sand appear in the streets: these are the locations of the bonfires that will blaze on the evening of the 16th January. Some of them will just be piles of logs but others involve a degree of creativity and handicrafting; these are the ones that will be judged in the annual competition to find the best bonfire. 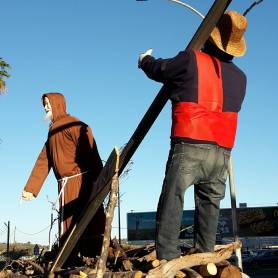 Sant Antoni appears on this bonfire 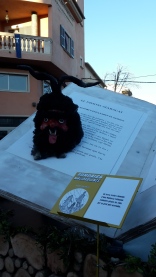 So much hard work went into some of the bonfire piles – shame they have to go up in flames! 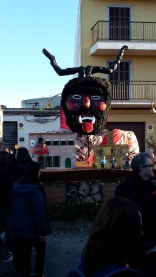 Creativity at its finest

During the afternoon of the day before Sant Antoni’s day, it seems as though the entire population is on the streets – strolling (or cycling) all over the town to see these creations before they go up in smoke that evening.

Better the dimoni you know…

Come the evening, the bonfires are eventually lit and the fun begins. People take meat and bread to cook over the torradas; these are informal barbecues, very often made from old metal half-barrels full of logs. The dimonis (devils) dance in a wild fashion through the streets and everyone has a great time.

It’s a night the youngsters of the town particularly enjoy and many of them wander the streets in chattering groups, clutching large bottles of what appears to be lemon Fanta. More often than not, it’s a Menorcan drink called pomada: a mix of Menorcan Xoriguer gin and sparkling lemon that is especially popular as a Sant Antoni tipple. Another much-imbibed drink is the bright-green Mallorcan herb liqueur known as hierbas. Mine’s a pomada, if you’re asking…

On the saint’s day (January 17th) itself, Manacor has a public holiday. The local priest, however, doesn’t get a day off: he’s in Ramon Llull square blessing the animal population of the town and surrounding countryside. This is one of my favourite fiestas, when many people dress in traditional costume to accompany their domestic and farm animals on their slow procession past the priest.

“Does my bum look big in this?” 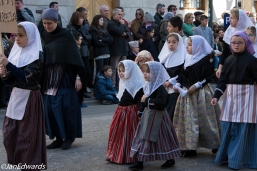 On their best behaviour 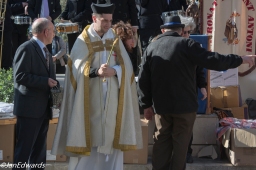 Ready with the Holy water

The festive season is now officially over in Manacor. Until February 10th…when it’s carnival. Mallorca sure knows how to party…