When we moved to rural Mallorca I had no idea that it would lead to us making new friends from around the world. We hoped to make new Mallorcan friends, because we’d deliberately chosen to move to somewhere populated mainly by local people, but we’ve been pleasantly surprised by the cosmopolitan nature of Mallorca – even in this rural area.

In our valley, we have neighbours – either resident or with holiday homes – from Mallorca, England, Switzerland, Sweden and Germany.

A blast from the past

Shortly before Christmas we had an unexpected visit from Ingo, an entertaining and erudite character from Hamburg, who’d owned a neighbouring holiday home with his wife Marion. They sold up here six years ago and bought a forest retreat in Germany, but he’d decided to make a short nostalgia trip to the island. We were thrilled that he’d remembered us after all this time; although we doubt that he fully remembers one hilarious evening we spent with him, eating bread and German sausage and enjoying a bottle or two of Mallorcan wine. We still chuckle about it . . .

A Swiss family bought his house and have become valued friends. They’re great fun and Peter is an excellent cook to boot. How could we not like people who arrived on our doorstep to introduce themselves, bearing gifts of Toblerone and Swiss Army Knives?

Today, we’ve had lunch here at the finca with newish friends who live and have a wine business in New York, but bought a rural finca as a  holiday home on Mallorca when they were living in Madrid. We met through a South African friend and former work colleague, who married a Texan, moved to the States, and worked in the wine industry. As I write, there’s a glass of Martué 2009 DO Pago Campo de la Guardia (Toledo) by my side – a bottle of which our New York friends brought with them to lunch. In the kitchen, there’s also an enormous pile of lemons and grapefruit, they brought us from their finca.

Mallorca may be a small Spanish island in the Mediterranean, but at times it feels like a global village, full of people with interesting stories to tell and hearts open to new friendships. It makes me think of that quote from the Irish poet W B Yeats: “There are no strangers here; only friends you haven’t yet met.” 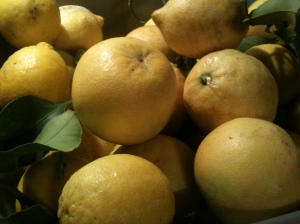