Yes, we still have cats, even though you won’t have read much about them lately (although there are occasional sightings on my mallorcajan instagram page). Our feline family now numbers six and, if you’ve read about our cats in previous posts, you’ll realise we’ve lost two. It’s heartbreaking when this happens.

We were devastated in April 2018, when Beamer – the alpha male of the outdoor cats – disappeared. This beautiful big black-and-white boy went off one day and didn’t return.

If nobody else needs this chair… 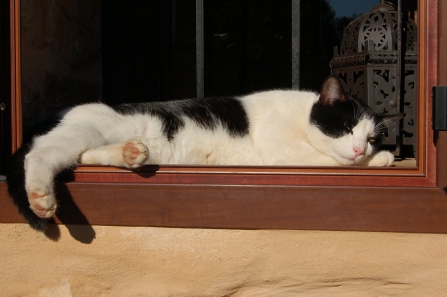 Sleep in this window recess? A favourite spot for this boy

The evening before he left, he was sitting on the low wall separating our back terrace from the garden and seemed to be sniffing the air. Was he curious to find out what was beyond his territory? He’d always been much loved by his siblings, who came to him for washing, approval, and sometimes a bit of play. Perhaps he’d had enough of the constant attention from them?

We’ll never know what happened to Beamer, but it was out of character for this eight-year-old cat, who spent a lot of his time close to our house. Of course, we searched for him – as far as it’s possible to look for a lost cat in what’s a natural environment of open countryside and scrub vegetation. I spent many months last year hoping he’d stroll back onto the terrace for his food one day. I was convinced he’d come back but eventually accepted that he was gone.

Minstral’s first visit to the vet in Mallorca, hiding under the table from the camera-wielding vet nurse 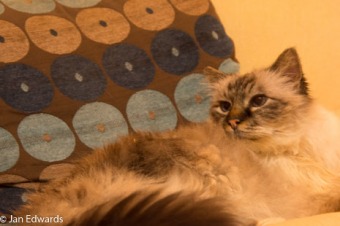 Sofa, so good. Minstral liked a life of comfort 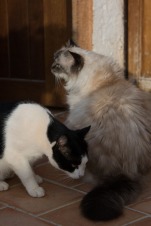 In late July last year we had to say goodbye to our beloved Birman, Minstral. As they say in cricket, he’d had a good innings, being twenty-one years old at the time of his demise. We’d adopted him in the UK and brought him to Mallorca with our rescue Maine Coon, Smokey – who sadly died of leukaemia in our early years here.

Minstral was on medication and diet food for the kidney problem that often affects older cats; he’d been the most chilled-out cat we’d known, but let us know when he’d had enough. Twenty-one is a good age for a cat in Mallorca and our vet hadn’t seen one of such seniority at his practice. We brought Minstral home and buried him alongside Smokey in the garden. We had him for 17 years and I miss him every day.

Had we lost another? 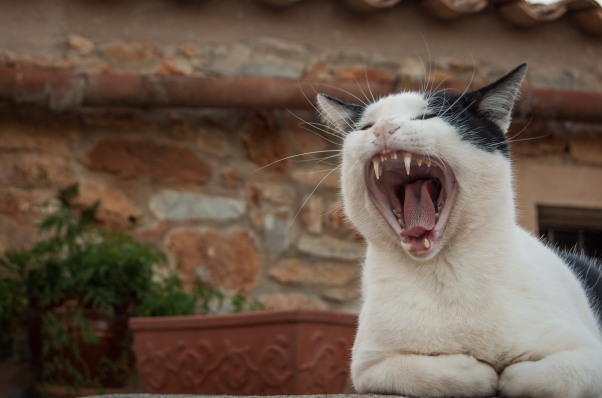 What a yawn! Those teeth are made for nibbling

Nibbles – one of Beamer’s siblings, younger by just four months – is The Boss’s favourite of our cats. Despite being of feral origins, Nibbles likes to jump onto his lap and play the affectionate card for a few minutes…before living up to his name and nibbling any body parts he can reach (usually a hand).

On his eighth birthday (July 31st), Nibbles came for dinner as usual – but limping. He wouldn’t let us examine his paw and leg, and it was too late to take him to the vet’s that night; we set up a blanket in a box under our porch and placed food and water right next to it, so he wouldn’t need to venture far.

“We’ll take him to the vet’s first thing,” The Boss said.

Nibbles might have heard us say that: in the morning he was gone. We didn’t see him again for eight days and wished we had captured him and taken him into our house for the night. For a few days, The Boss scoured the countryside for him, even venturing into the jungle that is our valley-within-a-valley for the first time in many months.

“It’s impenetrable down there,” he said when he returned, defeated, sweaty, and covered with bits of vegetation. With temperatures at the time in the high 30s, we feared that Nibbles wouldn’t survive the heat if he couldn’t at least drink. An air of sadness and helplessness hung over us.

On Thursday, August 8th, we attended a start-of-the-grape-harvest party at a local winery. It was a fun evening, which proved to be a brief distraction from thinking about Nibbles’s likely fate.

Our cats were waiting on the terrace, as usual, for our return. They must recognise the sound of our approaching car and time their arrival to coincide with ours. The Boss will often top up their food bowls at this point and, whilst he went indoors to fetch the cat chow, I stayed outside.

One of the cats was standing on our solar-powered fountain, drinking from it. I thought it was Chico until I realised that the leg markings were those of Nibbles. He was home and, although still limping, had survived the heatwave. As we hadn’t seen him for a week, he had probably conserved his energy by limping to the terrace for food and water at night, when the heat of the day was gone. I scooped Nibbles into my arms and was holding him when The Boss emerged from the house, carrying the box of cat food.

“Look who’s back,” I said turning around to face him. We were overcome with joy at seeing this much-loved cat again – but disappointed to see that he was now walking on only three legs.

Nibbles spent the night indoors this time and, in the morning, we took him to the vet’s. He hates the car and howled all the way there and back. The vet diagnosed a bite on his leg, gave him an antibiotic injection that would last fifteen days, and prescribed anti-inflammatory medicine for us to give him each day.

He’s still indoors and has become quite the home cat – so far showing little interest in the outdoor world and plenty of liking for sitting on soft cushions and having food and water within a few paw-steps. He’s now walking on four legs, albeit still with a slight limp; by the end of this week, Nibbles should be back outdoors with his feline family. Domestic life will return to normal. As normal as it ever is when you live in rural Mallorca and have a semi-feral feline family.

4 thoughts on “Our Cats in Mallorca”