The past few weeks have passed in a whirl and, although I have written several posts in my head about living in rural Mallorca, that was as far as it went. Perhaps the most frustrating of the recent events that have kept me away from writing what I wanted to was a problem importing photos into Adobe Lightroom – something I tried (and failed) to resolve (even with some helpful suggestions from friends) for three days.

It was hardly a major disaster in the great scheme of things, but annoying when I had captured an image that marked a significant milestone in the lives of our feline family. Thanks to a sainthood-deserving member of the Adobe customer support staff, the problem was finally resolved (after a few hours of on-screen chat and remedial action!).

Long-time readers of this blog will know about Pip, the tiny kitten that ‘arrived’ in our garden in September 2014. She has grown (and how!) into an adorable cat that’s full of fun, affection, and charm. It didn’t take her long to befriend two of the other cats in our feline family, Nibbles and Shorty, with whom she used to have fearless rough ‘n’ tumble play-fights on a regular basis when she was only a third of their size.

Pip has calmed down now and left those mad kittenhood days behind her. She eats with the rest of the gang and sometimes follows them down into the valley as they head off to their respective favourite spots for a snooze. But mostly she stays close to the house, sitting in the deep recess (the walls are 60cm thick) of our dining room window – a space she seems to have claimed as her own.

One of the family

There’s never really been any animosity between Pip and the other cats, but Beamer – the alpha male – always ignored her, and would simply walk away if she approached him. He was such a good big brother to the other cats when their mother Jetta went AWOL, that I always hoped he would do more than just tolerate little Pip. And then, just before Lightroom went loopy, I spotted something that made my heart sing: Beamer had jumped into the window with Pip and was giving her a wash! Once she was cleaned to his satisfaction – and after a little reciprocal licking – they curled up and slept together for the best of the day.

The pictures wouldn’t win any photographic prizes, but they won a place in my heart. And in the story of Pip.

A snuggle of appreciation. 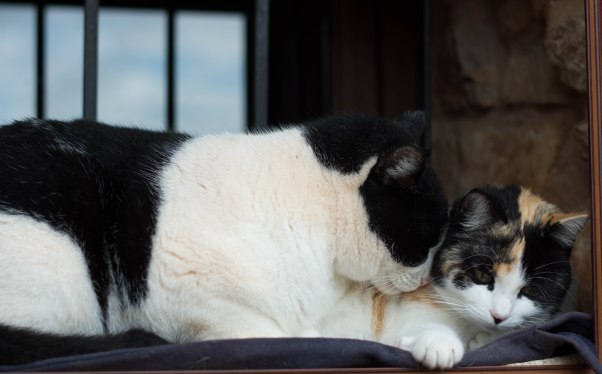 2 thoughts on “Cats on camera”