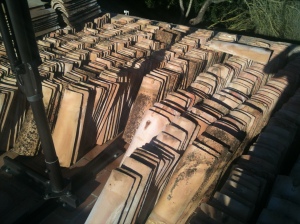 Our roof tiles, on the terrace

As I write this, half of our house in rural Mallorca is without its roof tiles. Such is the construction of these typical old fincas that, as I stand inside and look up at the terracotta tiles that form our ceiling, I can see the sky through the thin gaps between some of the tiles. Fortunately, it’s blue sky and not ominous rain clouds . . .

The builders arrived yesterday morning, promptly at 8am, to begin the job of repairing our old roof. Fortunately, they’re working on one side of the roof ridge at a time, so the showers of dust that fall periodically through the gappy ceiling tiles aren’t landing on my computer; I’m in the roofed half of the house.

It’s a big job. The three builders – Moroccans working for a local Mallorcan firm – began by carefully removing the traditional curved roof tiles. All done, I might add, without the aid of scaffolding; our outdoor wood-fired stone oven adjoins the house and they’re climbing onto that to get onto the roof. The tiles that have survived intact are currently stacked on the terrace, to be replaced in due course.

An hour after the workers had arrived, they were sitting on rocks in our back field, eating what the locals call ‘second breakfast’. (If that sounds a bit greedy, they probably had only a glass of milk and a biscuit for the first one – fairly typical). Then, they swung back into action, removing cement and some strange yellowish lumps that The Boss identified as foam he had once injected into some of the gaps between the roof tiles, to stop rats from using our roof space as a penthouse pad.

It was the noisiest day we’d ever experienced here in the valley. Somehow, amid the banging and crashing that was going on, the three builders managed to maintain a lively and ongoing conversation. Which was more than we could do indoors.

At 5pm, peace was restored. The workers had left for the day, leaving us to inspect the first day’s progress. There was a mini-mountain of rubble on the drive – looking like something Tracey Emin might have created. And our roof had been stripped back to what appeared to be a thin layer of tarred felt – the only thing that had been between the ceiling and the roof tiles.

It was obvious why we’ve had rain coming into the house: a couple of decades of fierce summer heat and ravenous rats had turned our roof’s undergarment into something resembling black lace. Hopefully, the new stuff will be more like Damart . . .

4 thoughts on “What lies beneath”