Want to be happier?  Well, some time ago I read something very interesting – and it’s stuck in my mind: researchers at University College London had found that just 20 minutes of housework a week reduces stress and lifts one’s spirits.

Now, I haven’t seen the research – and I’ve got far too much housework to do to investigate further  – but it made me think.

For a start, it suggests to me that, in general, people are now doing less than 20 minutes of housework a week – otherwise the findings wouldn’t really be relevant to many people. It seems such a small amount of time compared to the hours I spend trying to keep our finca clean and tidy.

It’s not that I’m a domestic goddess, who likes nothing better than buffing her mirrors or sweeping dust bunnies out from under the bed (although I doubt a real domestic goddess would have let things get that bad down there);  it’s simply that living in an old finca in the Mallorcan countryside is rather housework-intensive.

Dust is the demon here. In the winter, our woodburning stove is mainly to blame. Just bringing the log basket in usually leaves a trail of shredded bark, insects, moss, etc on the floor and then there’s the carrying out of the ashes every morning. If we’re really lucky when we open the outside door, the wind doesn’t blast the ashes out of the pan and all over the room. We’re not often that lucky.

But in spring and summer, when the stove is cold and doors and windows flung open, there’s another challenge to keeping the place tidy: the detritus blown in by the strong winds that usually whip through our valley. In July and August, when the ground is parched, clouds of dust – as well as the usual dead leaves and bits of twig – often accompany us in from the garden.

And don’t get me started on the terracotta ceiling tiles that grace many old fincas. Until The Boss got up there with a ladder and pot of filler, the gaps between some of them in our guest bathroom ceiling were so large that all manner of bugs – both dead and alive – regularly fell through from the space between the roof tiles and ceiling, littering the bathroom floor. 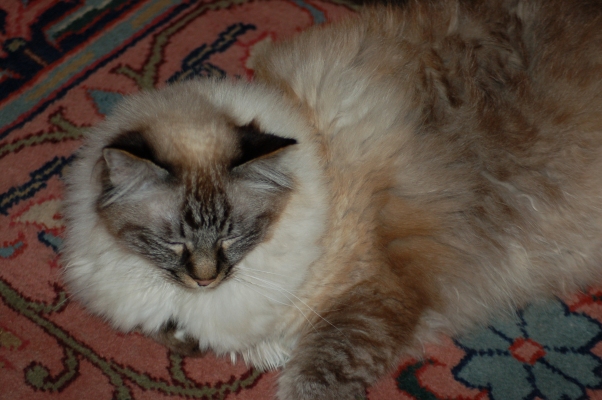 Minstral planting his hairs on a rug

Minstral, our beautiful 15-year-old Birman cat, makes his own contribution to my domestic duties, as clouds of fine white hairs waft in his wake. In the UK, his hairs didn’t show on the carpet like they do on tiled floors. And isn’t clearing up furballs fun?

I’ve just realised that I could have mopped the floor and dusted the dining room in the time I’ve taken to write this, but do I care? No. Reducing my housework to just 20 minutes a week is definitely going to lift my spirits.