Bonfires are blazing at the bottom of our valley. We can’t see the flames from our finca, but smoke has been billowing from different parts for days. In summer, when the merest whiff of smoke tickles our nostrils, we’re outside peering all around in case a wildfire has broken out. Bonfires are forbidden in wooded areas such as ours for almost half the year and only barbecues are likely to be creating smoke during these months.

Smoke billows from down in the valley

In the autumn and winter months, farmers and gardeners choose calm days to burn their mounds of combustible unwanteds. We sometimes see vertical columns of smoke making a lazy ascent towards the sky and can usually work out from its location which neighbour is having a burn-up. But the smoke that’s been wafting daily over our valley is not from ordinary bonfires. 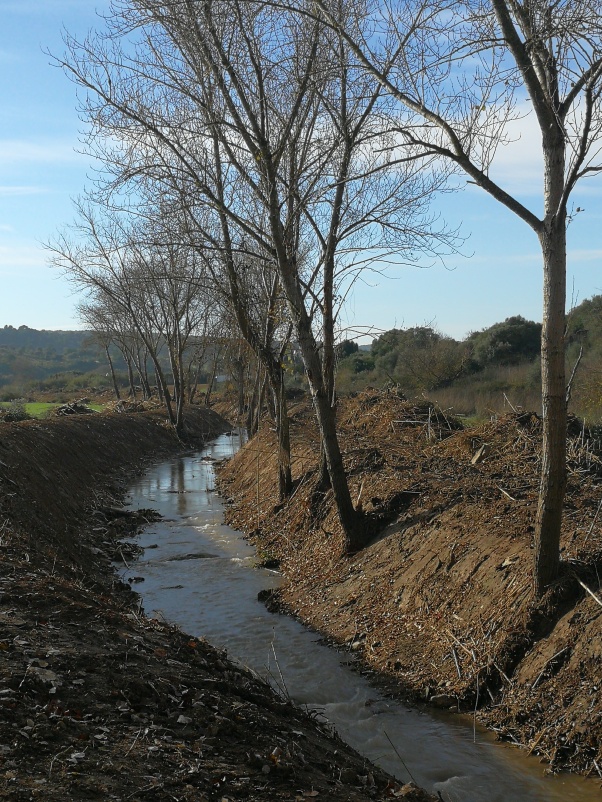 Prevention is better than repair

I wrote a while back about the appalling floods that caused the loss of 13 lives in the northeast of Mallorca – the area known as the Llevant. As well as the tragic loss of life, property and roads suffered damage that in some cases is still being dealt with.

Since that incident, work has begun to ensure that the area’s torrentes – often-dry stream beds – are cleared of vegetation and widened to accommodate even excessive rainfall, such as that which fell on Sant Llorenç on October 9th.

For several weeks, enormous earth-moving vehicles have been trundling along the torrente at the bottom of our valley, ripping out trees and shrubs and reshaping the banks. The vehicles have fallen silent now and all that remains is for the workmen to burn the mountains of vegetation they’ve removed along the route of the stream. The bonfires have been happening for days and will probably continue for a while. Although they aren’t particularly close to our finca, our black car is dotted with ash particles – but it makes no sense to clean it yet.

Any excuse for a BBQ

Tomorrow evening the aroma of smoke will also hang over Manacor, our nearest town – but it won’t have wafted from our valley. The 16th of January is the eve of Sant Antoni and it’s traditional for fires to blaze in the streets during this much-loved fiesta. Tomorrow, butcher’s shops and supermarkets will do a roaring trade in Mallorcan sausages and pancetta, to be cooked alfresco over the roaring flames of the fires dotted all around town. And maybe also in our rural valley. Pass the BBQ sauce…

Spotted this outside McDonald's yesterday (no, I didn't go in). Both these pigeons were having a bath in the his-and-hers tubs (aka dog drinking bowls). Stopped their antics by the time I got my phone primed for a pic! #palmapigeons #cheekypigeons #whatyouseewhenyoulookdown
Manacor loves Sant Antoni - and so do we! #fiestasmallorca #santantoni2020 #viscasantantoni #igersbalears #manacor #dimonismanacor #januaryinmallorca #livinginruralmallorca
Such a beautiful winter's day in Mallorca today. #portocolom #winterwalkmallorca #vitaminsea #igersmallorca
%d bloggers like this: