What are you least likely to pack in your carry-on bag when flying to Mallorca for a short break with friends? How about baby blackthorn bushes? Twenty of ’em!

Our friends Duncan and Kristina came over to Mallorca last weekend to remind themselves what sunshine looks like (well, they live in the UK and it’s been a bit thin in the sky of late).  When we picked them up at the airport, they were keen to point out that one of their carry-on bags needed to be transported carefully.  We thought nothing of it until we came home and said bag was opened . . . to reveal what looked like a bunch of twigs in some soil. 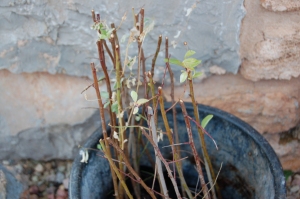 Our future source of sloes

On closer inspection they still looked like a bunch of twigs in some soil (miraculously the soil hadn’t parted company from the twigs – some of which were sprouting a bit of greenery). We were none the wiser until our friends explained that these were cell-grown blackthorn bushes that would grow into a hedge, and bear sloes.

The Boss had made some sloe gin about a decade ago, when we lived in the UK, and the last of it was shared with these friends during their previous visit. At the time, he’d mentioned that he’d like to make more, but sloes were almost impossible to find here.

Our friends set about finding a solution. They went to Buckingham Nurseries and Garden Centre (www.hedging.co.uk) where they explained that the plants were destined to be planted in Mallorca. The helpful member of staff provided plenty of advice and information (in the form of various leaflets that were delivered with the plants), and sold them the 20 baby blackthorn bushes that are currently residing in a bucket of water outside, ready for planting in our field over the weekend.

Our friends were slightly nervous about flying to Mallorca with the plants, but the nurseryman said it wouldn’t be a problem and offered to speak to airport staff on the phone if any problem did arise. As it happens, the case carrying the fledgling hedge passed through the airport X-ray machine without question. Maybe baby bushes aren’t such an unusual item to pack in a carry-on bag on a flight to Mallorca?

7 thoughts on “Sloe Road to Mallorca”