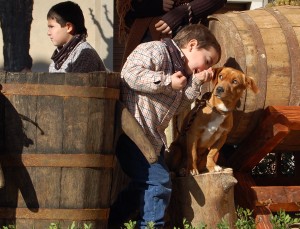 We’ve just come to the end of one of the most important weeks in the calendar of Manacor, our nearest town, in the east of Mallorca. Sant Antoni is the town’s patron saint, so it’s not surprising that the locals take the celebrations around this date rather seriously. Locally, it’s known as the Gran Semana – the big week.

Shops, businesses, and schools were closed on both Wednesday and Thursday, although supermarkets opened just for the morning on Wednesday, and our bank closed early every day of this past week. Almost everyone seemed to have bought themselves a sweatshirt or fleece emblazoned with this year’s Sant Antoni fiestas emblem and, costing around 16 euros a garment, they seemed a reasonably priced way to enter into the spirit of the event and keep warm.

And keeping warm has been necessary. The weather’s turned chilly and damp on Mallorca but, as we’ve seen on many occasions, the Mallorcans are rarely deterred by unpleasant weather conditions when there’s a party beckoning. We, however, wimped out and watched most of the celebrations on the local TV channel IB3, sitting in front of the log burner.

I was sorry to miss this year’s slow-moving parade of animals and imaginatively decorated floats around Manacor’s streets, on Thursday morning. On the morning of the saint’s day, animals of every sort – farm and domestic – are taken to be blessed by the local priest.

Attending previous animal blessings, I’ve considered taking Minstral, our Birman cat, but I suspect he’d be thoroughly miffed to have been removed from his favourite chair to mingle with animals the like of which he’s never seen. And, of course, we couldn’t take Minstral and leave behind the other eight cats that now call our finca home. I wonder if the local priest does house calls for animal blessings . . .