Twenty-two Mallorcan olives rolled around in the bottom of my bucket. Hardly what you’d call a crop, but – after several years of letting the olives from our young tree rot on the ground – I was determined to do something with the harvest of 2011. Google revealed some instructions for turning my hand-picked crop into a (very small) jar of olives steeped in rosemary-infused oil.

To this day, they’re still as hard as bullets and, according to The Boss (and he’s right), inedible. So I’ve pushed the jar to the back of one of the kitchen cupboards – where they’ll probably remain until the dreaded (and hopefully distant) day when we have to move out of our rural idyll for something less high-maintenance. By then, they might make a decent housewarming gift for whoever is lucky enough to buy our little finca . . .

Our friends Annie Sofiano and Martin Page – fellow Brits who moved to Mallorca to open an agroturismo (a country B&B) called Finca Son Jorbo (www.fincasonjorbo.com) – have had much better luck with their crop of olives. But dealing with their 306 olive trees (as opposed to our two) was a lot harder than they originally expected.

Having ignored the trees during the first six years of developing their business, they eventually decided to turn their attention to the neglected trees. “We knew that our farming neighbours were driving past and looking at them pointedly,” says Martin, “So we felt shamed into doing something.” 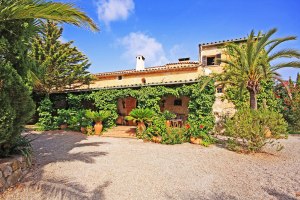 The tranquil Finca Son Jorbo – with its 306 olive trees

Martin’s farmer neighbour Miguel first gave the former TV production manager a three-hour masterclass in pruning. Then Martin set about pruning his trees, with Annie gathering and clearing the trimmings away to their bonfire site. It took six bonfires to burn it all. The subsequent weeding by hand, applying fertiliser, and spraying the trees to kill the olive-eating bugs, took the couple a considerable amount of time: “It was extremely hard work – especially for an interior designer from Birmingham!” Annie admits.

Miguel told them when the olives were ready, but reaping the harvest was done almost entirely by Martin and Annie. Once again, their generous Mallorcan neighbour offered his help, lending them some crates, the use of his trailer, and introducing Martin to the local tafona (olive press). To Miguel’s amazement, the couple had picked 400 kilos of olives, with little help: “It’s traditional here for the whole family to get involved,” Annie explains.

From olives to oil

It took four visits to transport the whole harvest to the tafona. On Martin’s last visit, Annie and his parents (who were staying with them at the time) came with him. They’d all spent the morning in Palma and, although Martin changed from his smart going-out clothes into working togs before going to the tafona, Annie went as she was. “As we were getting out of the car at the farmyard, I turned to her and said ‘lose the pashmina’,” Martin says. “In any event, she definitely got some funny looks!”

They paid around 27 cents a kilo for the pressing, which resulted in 63 litres of olive oil,  taken home in 10 large plastic containers, to sit in the cellar until they’d searched the Internet and bought bottles, tops, and a machine for sealing the tops.

As friends who’ve been lucky enough to enjoy some of their delicious Finca Son Jorbo olive oil, we’d suggest the effort had been worth it. Annie’s view? “The whole thing’s been a learning experience, but we know we’ve gone up in our Mallorcan neighbours’ estimations.”

You won’t be surprised to know that I haven’t mentioned my own olive endeavours to any of our neighbours . . . 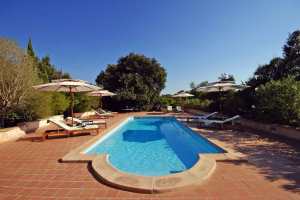 This article is an abridged version of one I wrote for the weekly edition of The Telegraph, published in March 2012.

Our neighbours prepare to harvest their almonds

The repetitive clink-clink coming from the direction of the nearest farm means that it’s almond-harvesting time again. Mallorca’s countryside is renowned for its numerous almond orchards and, in particular, the magnificent sight of the almond blossom in late January/February. The locals say their almonds are the best in the world, and I wouldn’t dare disagree.

Almonds have been a fantastically useful crop for a long time here. In the corner of our dining room is an old Hergom stove (sadly no longer operational) in which almond shells used to be burned to heat the house. I’ve even read that, back in the 50s, some people here ran their cars on burning almond shells. I have an image of passengers shelling almonds furiously as the driver progresses, so that their final destination could be reached. Given the record prices of petrol and diesel right now, it could be time to return to this practice.

The almond is a highly nutritious nut and the Mallorcans have plenty of recipes incorporating almonds – one of which is one of the island’s best sweet treats, known locally as gató. This is a delicious almond cake, usually served with almond ice cream. It should be made without flour, making it suitable for those on a gluten-free diet, but if you visit Mallorca and want to order this when eating out, it’s wise to confirm that no flour has been used. My father is a coeliac and during his visits we have sometimes come across versions that have some flour in them – presumably because flour is cheaper than almonds.

Almond oil can be used in cooking and also makes a wonderful natural moisturiser for the skin. I recently paid less than 3 euros in a pharmacy for a bottle of almond oil and a little goes a long way (especially if, as I did, you knock the bottle over and spill some!).

There are several ways to harvest almonds and most of the folks in our valley use the traditional methods: large nets are placed on the ground around the tree and long metal poles are used to bash a hailstorm of nuts to the ground. It looks like the kind of job that ought to require a hard hat, but health and safety rarely seems a consideration here. The more sophisticated farmers – or those with large orchards – use a tractor fitted with a device to shake the tree and a strange attachment resembling an upside-down umbrella, that catches the nuts.

As for us, we have nine almond trees on our land, although not all produce the sweet variety. Being the main consumer of almonds in our household (I have them every morning with fruit and yogurt for breakfast), it falls to me to harvest our nuts. Any day now, I’ll be out there, knocking the almonds from the branches using the plastic handle from my kitchen broom. No chink-chink here . . . more of a dull thud and a curse when an almond bounces off my head.

And then comes the laborious task of removing the nuts, first from their fibrous husks and then their shells. Given the speed at which I manage this part of the job, it’s a good thing we’re not depending on the shells for car or home-heating fuel . . . 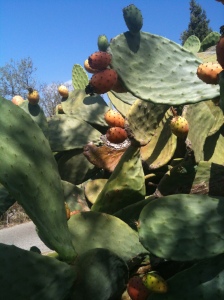 The Mallorcans call them figues de moro, or Moorish figs, but I just call them dangerous. The prickly pear cactus or Opuntia ficus-indica, if you want to go all Monty Don, is a common sight in rural Mediterranean gardens. Some people grow vast ‘bushes’ of it around the perimeter of their property, as a kind of burglar deterrent. A not unwise choice, since the large flat leaves of this prolific plant are covered in tiny spines that can be extremely irritating if they get into your skin. I speak from personal experience.

We usually avoid going too near our large prickly pear cactus, which borders a short stretch of the lane that leads down into the valley. Funnily enough, when our outdoor cats were kittens, they used to leap from leaf to leaf without any apparent problems, but on the occasion that I stood up from weeding the ground underneath our plant and my forehead hit a leaf on the way up, I had no such luck.

I rushed into the house and looked into the mirror, expecting to see the tiny spines sticking out of my skin. I couldn’t see anything, but if I brushed my hand over my forehead, I could certainly feel them. Dozens of them. The Boss spent a patient half hour or so with a magnifying glass and a pair of tweezers extracting the irritating little devils from my skin. Not an experience I wish to repeat.

Which is why, at this time of the year, when the prickly pear fruits are ripe for the picking, you won’t find me harvesting them. I’ve never eaten one (which I perhaps should rectify) but have heard mixed reports: some people say they’re pretty tasteless, others describe them as delicious. I have a recipe for prickly pear sorbet, but doubt I’ll ever make it. You see, the fruits also have these nasty little spines, and the job of peeling the fruits puts me off.

Last week, a large old Mercedes stopped outside our gates, and the driver hooted for our attention. He turned out to be a passing Moroccan who had spotted our vast crop of prickly pear fruits and wanted to know if he could have some. It seems a pity that they go to waste, so we told him to help himself to as many as he wanted. I hope his wife had some good thick gloves . . .

Handle at your peril!