If you’re going to live on Mallorca, it pays to have a good relationship with a plumber. Over the years we have been here we have spent a lot of money at our local plumbers. During our early time here it seemed that almost every problem we had with the house was water-related.

Cito and his team have come to our rescue many times. He’s had a few good plumbers (and electricians – as his company Ca’n Pedro does both) working for him over that time: Miquel Angel – who once found The Boss prone on the dining room floor with blood pouring from his head after his accident with the low lintel over the front door; Pep – who accidentally put a pickaxe through the cold-water pipe while trying to locate a burst hot-water pipe under our tiled shower room floor, and Rubens (also an electrician), who rescued us when a burst of my KitchenAid blender (I was making soup at the time) caused the whole electricity system to go phut.

Cito seems to be winding down his business a bit – perhaps with an eye to his future retirement – and today it’s Cito himself who’s working at the house, aided by his son-in-law. Yes, another water-related problem at the finca!

Our house has two gas-powered acumuladores (water heater/storage units): one serving our shower room and annexe guest room; the other for the kitchen and our main guest bathroom. Naturally, the latter gets the most use; we had to replace it with a new one quite a few years ago.

The other one has quietly done its job over the years but, a week or two ago, after The Boss had attached a new gas bottle, the thing wouldn’t re-light. As it happens, the lack of hot water isn’t a problem at this time of year. Our water supply comes to the house from our water storage tank in overground pipes and the cold water has been arriving hot in our taps for several weeks, as a result of the summer heat. What should have been hot water in the heater unit was cold. Problem temporarily solved: we’d use the cold tap for hot water, and the hot, for cold! 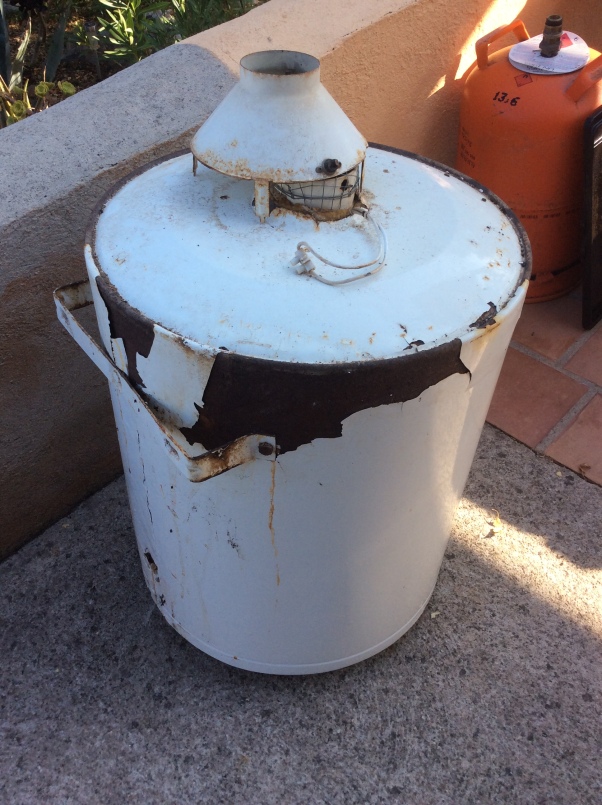 Our acumulador had lost its looks as well as its functionality!

Cito to the rescue

Cito came out to inspect the water heater, and removed a sorry-looking part. He came back to us later with the news that a replacement part would cost a couple of hundred euros. As that water heater is at least 13 years old – we’ve never replaced it since we bought the place in 2002 – it made more economic sense to buy a new water heater.

Today it’s been fitted in the small cubby hole housing the water unit.  There was a slightly worrying moment when Cito announced that the door wasn’t wide enough to remove the old unit (The Boss had modified the entrance to the room and hand-built a new wooden door and frame a while ago).  For a horrible few minutes we imagined having to undo The Boss’s painstaking work, but Cito somehow found a non-destructive solution, and the job has just been completed.

Now we have hot water from the hot taps again. And, while the summer continues, also from the cold taps . . .