It’s not unusual for Mallorca to have storms in late summer. It’s as though all the heat and lack of rain build up, until they can’t be contained any longer and, like a volcano erupting, we experience an explosion of weather. This year it happened on Saturday (29th August). And things certainly went with a bang at our finca in rural Mallorca.

We were away on Friday night (celebrating The Boss’s birthday). It had been a hot week, and rain and thunderstorms were forecast for Saturday. At the time, we were looking forward to the prospect of rain for the garden and slightly cooler temperatures.

Gun-metal-grey clouds on Saturday morning encouraged us to head for home earlier than we would otherwise have done. An email from a follower of this blog, who has moved to a finca in our area, mentioned intense lightning at five o’clock that morning. Lightning and solar-powered electricity do not always go well together, as we have discovered in the past. During the drive home, the sky became more threatening and, as we turned into our lane, spots of rain began to fall and impressive fork lightning stabbed at the land in the distance.

When we entered our home, our unspoken fears were confirmed: we had no electricity. Our inverter had already been damaged by the pre-dawn storm. Before we could mentally digest what this would mean for the rest of our weekend (no lights, phone, TV, etc), hailstones began pounding onto the roof of our house.  We looked out as chunks of ice the size of hens’ eggs bounced all around the place. All we could think was that if we’d set off as little as fifteen minutes later, I’d have been driving us home through that storm.

As soon as the hail and rain had stopped, we ventured outside to check the state of the house roof. Astonishingly, the terracotta tiles appeared to have survived the brutal onslaught. Turning our attention to the car, I spotted a dent in the bonnet—surprised to see just the one. Then I spotted the real damage: the hailstones had shattered the sunroof of the car. What a mess. 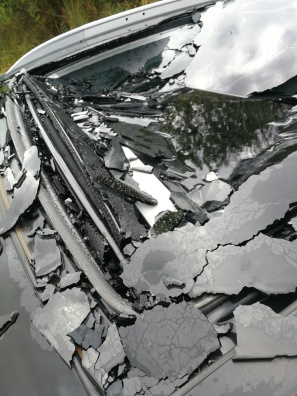 That was the sunroof that was

Another aspect of the storm damage to our car’s sunroof

So, no electricity, WiFi, phone, or car. Thank heavens for our kind Swiss neighbour Brigitta, who allowed us to use her phone to call our solar-power company. And well done (and heartfelt thanks) to Taller Servera in Llucmajor, who delivered a loan replacement inverter early that Saturday afternoon so that we could have electricity until they can repair our own inverter.

It may be true that lightning never strikes twice in the same place but, over the years, it’s managed three strikes on our inverter.

7 thoughts on “Storm Drama in Mallorca”