Earlier this summer I was involved in the filming of an Israeli foodie TV show in Palma, which was really interesting. I haven’t seen the finished show but know it was recently screened because a friend on the island – married to an Israeli – contacted me to say she’d seen me in it. Read about the filming here (post dated June 20th) if you’re interested.

Last Friday I was at it again, having been invited to be part of a ‘spot’ which will be screened on social networks at some future date. I’m not supposed to give away too much information, but one part of the shoot (which lasted most of the day and took us to four different locations) was a picnic at the lovely ermita at Vilafranca de Bonany.

A hilltop picnic of Mallorcan products.

A coachload of tourists has a quick look around. Film crew takes a break… 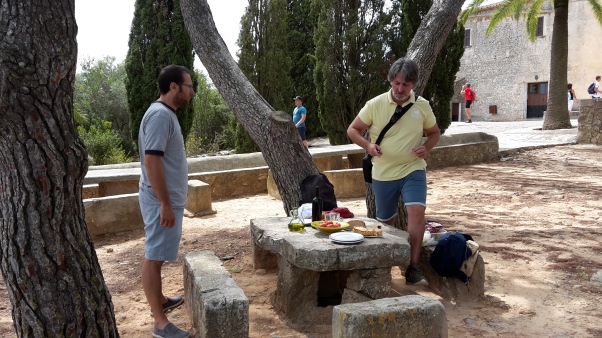 Who Invited the Wasps?

I was invited to take along a Mallorcan friend and Montse, one of our lovely neighbours in the valley, seemed thrilled to be asked along. She took on her role as picnic hostess with relish and we both had great fun – although the numerous gatecrashing wasps were a pain in the proverbial (but, thankfully, not literally).

The location is beautiful and The Boss and I have taken a picnic up there on several occasions. If you’re lucky – as we have been in the past – you may be the only people there, taking in the spectacular island views. On Friday, just as the camera was about to start recording, a coach full of tourists arrived but, after a quick look at the views (they seemed to avoid the ermita building itself), they were back on the bus and off down the hill’s winding lane. Peace had descended again on this special location.

If you have the opportunity to visit this place, do take it. It’s best approached from the Petra road off the roundabout with the ‘dancing statues’ near the Es Cruce restaurant, rather than through Petra itself.

4 thoughts on “Back in Front of the Camera”