My UK broadcast media links have not been completely cut as a result of our move to rural Mallorca in 2004. On a few occasions BBC local radio stations have interviewed me by phone about some topical aspect of being an expat. I hope that my years’ experience of being a radio presenter have given me a good idea of what the interviewer wants from a guest contributor. It’s always fun to be back on radio in the UK, broadcasting from our country home in Spain …

The Only Way is … a Farmer and a Goat 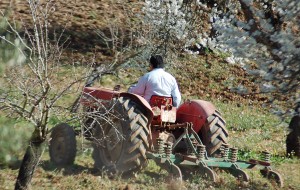 This blog has also brought a few media requests my way. Recently, someone from the production team of UK reality TV show The Only Way is Essex (popularly abbreviated to TOWIE) contacted me. They were coming to film for a couple of weeks on Mallorca. Did I know a typical Mallorcan farmer here they could film? Oh, and would I be able to locate a goat as well? The mind boggled – not surprisingly, because there was no explanation as to how these ‘locals’ would be used in the filming … 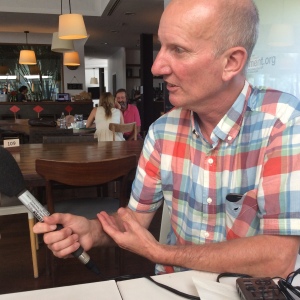 Adam Kirtley in interview mode for the BBC on Mallorca

Our latest request for help came at short notice, when BBC News journalist Adam Kirtley arrived on Mallorca yesterday to do a story on the likely effects of Brexit on expats. Adam and I spoke by phone mid-morning yesterday and we arranged to meet outside Palma’s Sóller train railway station at 3pm. He said he’d be wearing a checked shirt and Geoff-Boycott-style hat. Despite the fact that he’d clearly mistaken me for someone who knew something about  the headgear of the former cricketer, I managed to pick him out from the crowds of sightseers emerging from the station.

The Boss and I drove Adam down to Palma Nova, where we visited the Amadip Esment café and recorded some interviews. We then attended part of a meeting in the town hall in Calvià – the southwest municipality that’s home to Mallorca’s largest number of British expats.  There, British Consul General Lloyd Milen addressed an audience of Brits and listened to their concerns. Of course, there were more questions than answers – because it’s still too early to know what our home country’s eventual departure from the EU will mean for those of us who live abroad.

A bit of bureaucracy meant we couldn’t record any of the meeting itself (we didn’t have enough notice to obtain permission from the powers-that-be), but Adam was able to gain enough information for one of several reports he was compiling for BBC local radio and the World Service.

So I’m going to be on the radio briefly again in the UK, answering questions from Adam. And The Boss makes his BBC radio broadcasting debut …

Who goes shopping for DIY or building materials at 7am? We certainly don’t but, at that early hour last Wednesday, Mallorca’s newest DIY superstore BricoMart opened its doors on a new polígono, or industrial estate, just outside Palma. Needless to say, we were not there, wearing our jim-jams, clamouring for a bargain bag of mortar or rawlplugs in rainbow colours.

The rise of the big boys 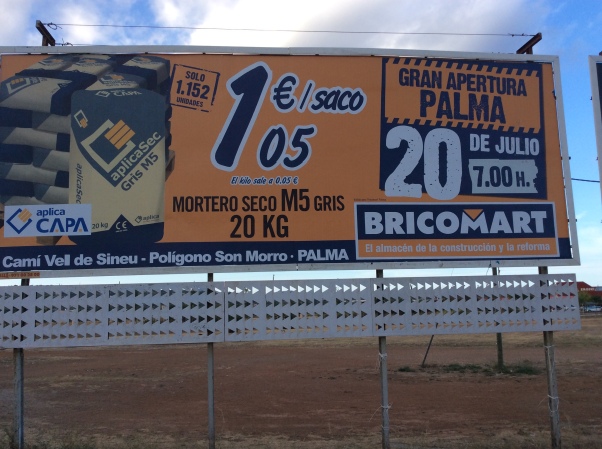 For weeks now, BricoMart’s billboard advertising campaign around the island had been sounding what’s probably the death knell for a few more of Mallorca’s traditional ferreterías – the family-run hardware/ironmonger stores we frequently had to visit for materials during the early days of doing up our finca home. How can these small but useful shops compete with the big boys? In and around Palma, we now have BricoMart, Brico Depot, Bauhaus, and two branches of Leroy Merlin. We have concluded that Mallorca’s inhabitants have become DIY-dotty.

When we moved here in 2004 there was no shortage of ferreterías in our nearest town, Manacor. Some were tidy, with everything clearly visible and displayed in a logical fashion. In others, we had to ask for what we wanted and the shop assistant would nod sagely, disappear somewhere to the rear of the premises to ferret around for a bit (which is not why these shops are called ferreterías), and reappear brandishing the requested item.  These were the places where you could tap into the shop assistant’s years of experience and, if the requested item was unavailable, he (it was invariably a male) would suggest a suitable alternative. If none of these useful shops could supply what we wanted, there was always the option of Palma’s two Leroy Merlin stores – the nearest equivalent to the UK’s Homebase stores.

Many of these small local shops have since closed – some undoubtedly because of the competition from larger stores. In Manacor, the first real competition was probably Hiper’s bricolaje. One place run by two brothers – a multi-floored emporium in the heart of town – closed down several years ago when the next generation of the family decided in favour of university and a more lucrative career than running a shop. Back in the days of shopping there, we would inevitably come home with a small gift, as well as the item we’d gone to buy. (This – like the bowl of free sweets on the counter for customers to dip into – was a common practice in local independent shops, but ended when the recession hit).

Locally we still favour a particular ferretería in Manacor. It’s been there for years and so, probably, has most of the stock. But this family-run place understands personal service and that sometimes a customer needs only half-a-dozen screws, rather than a jumbo pack of 200. We go here for the friendly service, a bit of a natter (the owner does enjoy putting the world to rights), and because if those long-cluttered dusty shelves at the back can’t yield what we want, they’ll order it for us. And because, at 7am, they – like us – are not yet ready to start the day’s business.

The Boss and I recently stayed at Finca Son Jorbo, which I mentioned in my last post. Here’s an article I wrote about our stay for Katzenworld.

Parasol or gazebo? We needed some shade from the sun on our rural Mallorcan finca terraces, but the parasols we’d had in the past hadn’t proved man enough to withstand the odd tornado or unexpected strong gusts that occasionally rip through our valley. 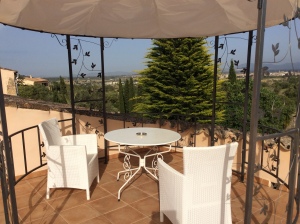 Pretty gazebo on the terrace of Finca Jorbo’s Rosa apartment.

Gazebo then. We saw quite a few variations on the gazebo theme. Some were very attractive – like this one at Finca Son Jorbo in Porreres, where we recently stayed for a night’s B&B (much-needed respite after visitors). But none looked as though they’d survive on any of our exposed terraces.

The sunshade solution for us

In 2011, we found just the thing in Palma’s Leroy Merlin, one of those large out-of-town stores that we’re not that keen on, but sometimes resort to when all else local fails. Although the store didn’t have anything sturdy on display or in stock, by chance we spotted just the thing in a Leroy Merlin catalogue that was on display. It was billed as a Pergola Tenerife and had to be bolted to the ground. Well, that had to be strong, didn’t it?

We ordered our first one (for our small back terrace, most battered by the wind) and waited for Leroy Merlin to order and deliver it. It arrived in two huge packages: one for the framework, the other containing the actual canopy part. Did I mention how heavy the frame was? Being early in the season (we were planning ahead for the summer), there were no strong part-time neighbours around in their holiday homes to lend The Boss a hand. I ate a huge plate of spinach for breakfast, flexed my biceps, and went to his aid.

Erecting the thing was an interesting experience. Once The Boss had bolted the two side columns onto the terrace tiles, the heavy top bar had to be hoisted up and fixed across the top of them. Ladders (wobbly, one at each end), language (fruity), and luck (we didn’t drop it) were all part of the process. It was hard work, but worth it. So much so, we bought another one for the front terrace the following year and put ourselves through the whole process again.

Although the metal frame has (so far) proved invincible, the fabric coverings themselves had become very tatty by the end of last year; yes, the strong winds again. This spring we found a local company to make some stronger (we hope) replacement toldos. It took weeks to get a quote for the work and several more for the new ones to be manufactured and installed, but they finally arrived … after our first two lots of visitors had been and gone home again. 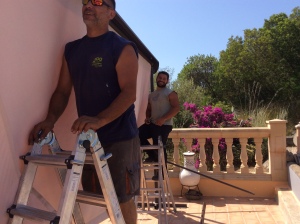 It’s been 35 degrees in the shade today. Phew. Perhaps what we should have bought was one of those canopies (seen on a few cafe terraces) incorporating a system that regularly squirts a fine cool mist over those beneath it. Having spent a small fortune on two new toldos, we’ll have to be satisfied with a session with the garden hose … 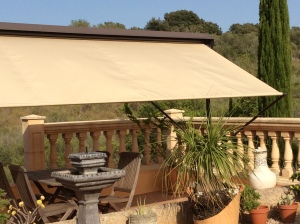