When we moved to rural Mallorca a decade ago (was it really as long ago as that?), solar panels weren’t a very common sight. Now, there are solar ‘farms’ all over the island – huge banks of panels basking in the Mediterranean sunshine. Our nearest used to be a quarry. We’re much happier with the solar ‘farm’, as it means no more heavy lorries thundering along the main road.

Solar makes sense – we enjoy around 300 days of sunshine a year on Mallorca. But can we find a solar-powered water feature for the garden? No. We have a small corner of our dining terrace that would be the perfect home for something small and tasteful, that would enable us to enjoy the cooling sound of trickling water on a balmy evening.

It’s easy to find these things in the UK – even though our motherland doesn’t enjoy anything like the amount of sunshine we have here on the island. I’ve found websites galore, with water features to suit every taste (including lack of any) and budget. But none ships outside the UK. I’ve looked on Spanish websites too and have not yet found anything.

So far, our search of garden centres and DIY places on Mallorca has been fruitless. One friend suggested that perhaps we could buy a solar pump (easier to source) and design/make our own. I’m sure The Boss is more than capable of doing this, but he has enough to do around the place without another job for the list.

We’ll keep searching, but it looks as though this will be our only water feature this summer . . .

On Sunday we decided to combine a morning walk around the valley with a few tasks involving our neighbours.

First stop was the finca of our friends Peter and Maureen, to take photos of their rather impressive agave ‘flower’. It still appears to be growing and, for the time being, there’s no sign of the thing keeling over in its death throes. Our friends have a plum tree, seemingly growing out of a concrete terrace, and in previous years they’ve been able to harvest plenty of fruit. This year, it had just six plums growing and Peter told us to help ourselves when they were ripe. Having done our David Bailey bit with the agave, we picked the few fruits – which were at the point of perfection.

With three in each pocket of my shorts, we continued down to our German neighbours, where we delivered a bottle of Mallorcan Sa Rota wine from Bodegas Bordoy in Llucmajor. This was our way of thanking them for a recent gift of oranges, courgettes and lemons from their garden. Many years ago they kept horses and, because of that, their land is very fertile. Ours isn’t, which means we can’t reciprocate with any produce of our own. But we’ve found an arrangement that seems to suit both giver and receiver: a thank-you gift of grapes-in-a-bottle.

Halfway through our walk, plum juice started to seep through my shorts: the motion of walking had bruised the fruit, so we had no choice but to eat them as we went.  And they were delicious. We were still licking the juice from our lips when we passed the old pig farm – now used mainly for arable crops (although there are always two porkers snuffling around under their huge fig tree).  Toni – the Mallorcan who works the land there – called out a greeting and offered us some of his plums. The branches of his old tree were heavily laden with the ripe fruit. He whipped a plastic carrier bag out of his pocket and, minutes later, it was full of plums.

Our next stop was the house of another friend, Michael, who has a few fig trees. He’s not on the island at the moment and can’t take advantage of the figs that are already ripe.  So we came to an agreement with the wasps that were taking advantage of the seemingly unwanted figs and managed to pick a few without being stung.

With such a lovely bounty of fruit, there was only one thing to do when we returned home: despite the heat of the first full day of summer, I set to and made three pots of fig jam. When Michael returns to his island home, we’ll give him a pot and he’ll be able to taste the fruits of his own garden labours. 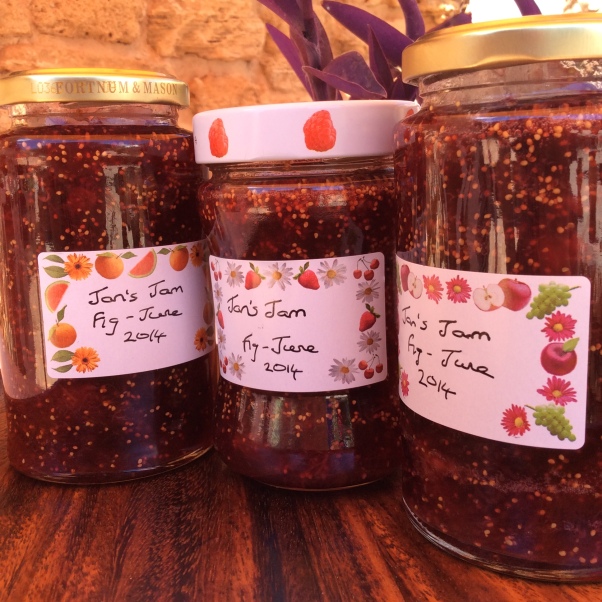 Bring on the toast!

We have old friends holidaying on the island in a finca down in the southeast. Like many sun-starved Brits, they were longing for some Mediterranean warmth and sunshine during their two weeks’ holiday on Mallorca. How disappointing for them that the weather changed on Sunday (the day after their arrival), with thunderstorms and rain replacing the fine spring weather we’d been enjoying over the past few weeks.

If Sunday’s storm wasn’t enough, we had more yesterday and last night. Yes, another night when The Boss had to get up, get out and switch off our solar power electricity system.  It was all quite dramatic – with some incredibly loud claps of thunder that rattled every pane of glass in our little casa – but, here in our valley, there wasn’t anything like the quantity of rain that fell elsewhere on the island.

Just five minutes’ drive from our home is a winery and, last night, we saw on the local IB3 TV news that their cellar had been flooded. Today, the Majorca Daily Bulletin reports rainfall yesterday in Campos (in the south of Mallorca), of some 69 litres per square metre and, in Palma, 47 litres/sq.m. TV news footage and social media photos show that Palma took quite a hit too, with flooding on some major roads and trees brought down in the city centre. The Bulletin also reports that 360 bolts of lightning struck the island in less than three hours.

Having been the victims of bad weather (and a dodgy roof) in the past, we feel for those people across Mallorca who are mopping up the mess and assessing damage this morning. As I look out of the window at a benign spring day with sun shining from a blue sky, I can’t help wondering: who counts the bolts of lightning?

The storm approaches. Meanwhile, we were sipping coffee in the sunshine.

Our Mediterranean-style garden on Mallorca began simply enough, with just a few baby plants of the Agave americana variety – given to us by a kind neighbour. We duly planted them, fairly close together, not appreciating quite how large they would become in due course. Later, we transplanted the ‘babies’ the original plants produced, increasing our garden stock.

They’re majestic-looking architectural plants, but can be painful if you get too close: the needle-like spike on the end of each ‘leaf’ is devilishly sharp and can cause bruising if the skin is penetrated deeply enough. Both The Boss and I have experienced weeder’s bottom – in other words, been ‘got’ by one of these leaves, while clearing the earth that surrounds the plants of unwanted greenery.

One day our agaves will probably flower – it can take a dozen years or more before they do so – and, after the magnificent effort of producing their only bloom in life, they die. We’re hoping ours don’t all keel over at once – the garden would look devastated.

Meanwhile, our English part-time neighbours and friends are facing the demise of a massive specimen of Agave americana. They think it’s probably been on their property for around 20 years. Once the central spike that heralded the start of the flower became visible, they started to monitor progress, keeping measurements and marvelling at the rapid pace of growth. There’s something almost alien about their appearance – the flower stalk of the Agave americana, not our neighbours. It soon resembled the world’s largest piece of asparagus. We were tempted to send a photo to Sainsbury’s vegetable buyer, but didn’t think the gesture would be appreciated . . .

Our friends have returned to the UK for a while, so we are monitoring progress, which seems now to have slowed somewhat. We don’t want them to miss that moment when the flower is in its full glory.  As you can see, there’s still have a little way to go . . .

It’s the start of an agave flower, not a tree. Photo by The Boss.

Until this week, we were having a rather unsettled spell of weather on Mallorca, with some much-needed (unless you were holidaying here) rain and some thunderstorms. The Boss and I quite enjoy watching a dramatic storm – and we do get a few – but we are always  wary about the damage that an electrical storm can do to solar power equipment. We have bitter experience, having suffered an invertor failure a few years ago during a particularly bad storm. The invertor was only three weeks old – and had cost a huge amount of money – so we were relieved to learn that the (expensive) repair was covered by our household insurance. And that our solar power system engineer would lend us an invertor until the repair could be done.

When he came back with our fixed original invertor,  he recommended that we switch off all our system equipment during future storms. So we now keep a weather eye open (pardon the pun) for any thunderhead clouds on the horizon or distant rumbling, and switch everything off if the storm arrives.

This is fine during the day but, at night, it means somebody (and it’s always The Boss, because he’s gentlemanly like that) has to get up, go outside and dash down the field to the dependencia, where all the equipment is housed, to switch everything off. So thunderclaps at night don’t only wake us up, they can get us up too.

Four of our adoptees huddled in the window recess. Underneath three of them is little Peanut!

Hopefully last week’s overnight storm will be the last for a while. This week we’ve had temperatures in the low 30s (Celsius) and plenty of sunshine. Our cats disappear after breakfast to hide themselves from the heat – whereas, in stormy weather, they often like to gather together in the outside recess of our dining room window. As you can see, from a photo I took during last week’s bad weather, the pale ginger Peanut – the youngest of our adoptees – has been accepted by the rest of the family . . . even if it is only as a willing pillow!